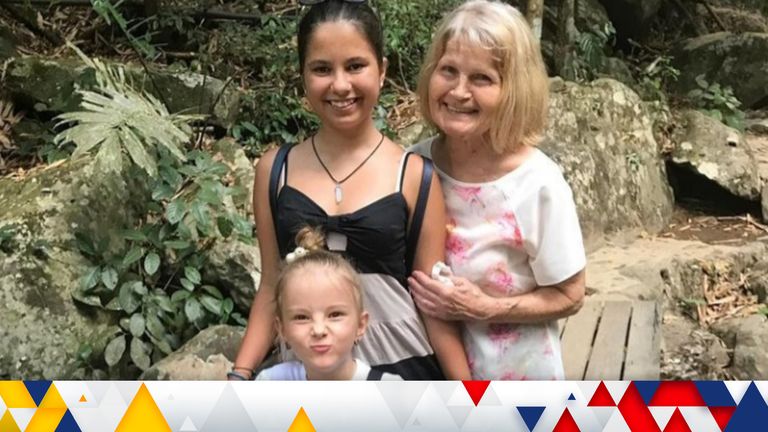 The UK visa scheme for Ukrainian refugees has been accused of being slow, confusing and too restrictive on who can enter - in a time when many are fleeing for their lives.

Fewer than 1,000 visas have been granted, and on Thursday the government acted to speed up the process - but there are still calls to scrap restrictions on who can enter.

Sky News has spoken to people struggling to get family members to safety.

Michael Felton is trying desperately to find out if his 83-year-old mother-in-law, Nadia, can get permission to come to the UK - but so far has been told she doesn't qualify.

He says his wife and daughter finally convinced her to leave her home in Kharkiv, northeast Ukraine, after telling her "come out please, we don't want you to die in this stupid war".

She had insisted on staying in her homeland.

"She was doing okay - not too much fighting directly - although there were a couple of dead bodies there the week before, when a couple of shells hit down the road," says Michael.

A few days ago, she took a bus to the central city of Kremenchuk, which is "far from most troubles" at the moment. Image: Michael's mother-in-law was finally persuaded to leave Kharkiv (pictured) and travel to the border

But Michael, who lives near Chester, says he's now "in limbo", waiting until she can make it to the Polish border and he can fly out to help her.

He's worried about her welfare, as there are reports of people having to walk the final stretch: "She's 83 years old and pretty frail - she's got a little dog with her," he says.

"The UK government is not being helpful. Inviting people to go and apply for a visa is pointless, next to worthless," he adds.

"You have to book in - four or five days to get an appointment - and after that you have to wait for them to handle the application which can take another three, four, five days.

"And they're fully within their rights to say 'sorry, rejected'." 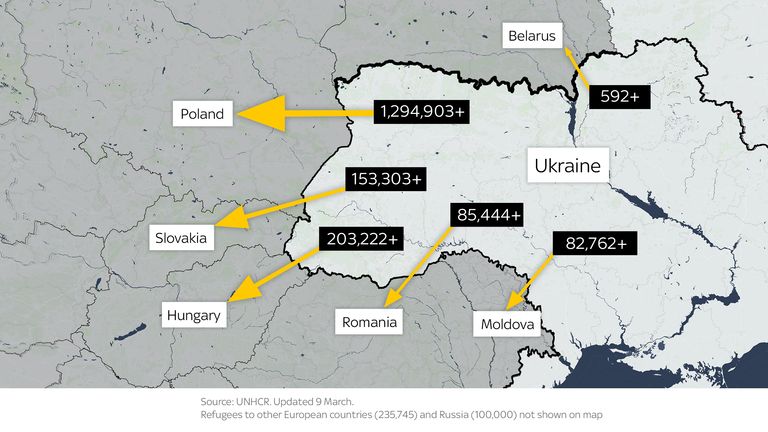 He says the government helpline adviser told him his mother-in-law "doesn't count as a family member" - and the situation is made more difficult as his wife isn't a UK citizen and isn't in Britain at the moment.

The woman on the other end of the line was trying her best, he says, but "had a set of guidelines in front of her but that's all she could do". 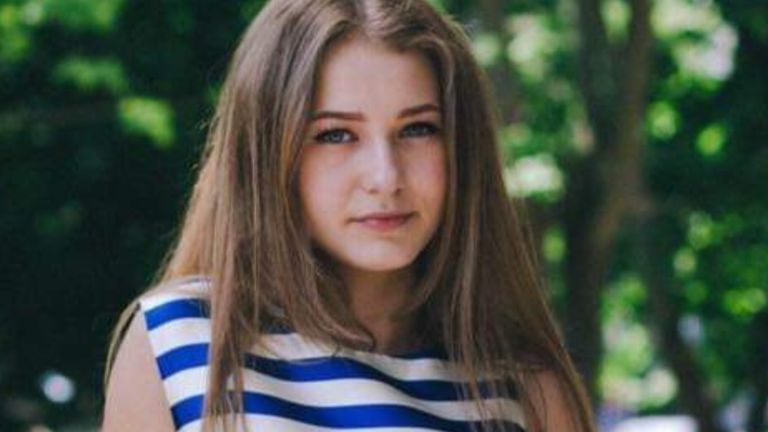 Image: Gemma Duffy's stepsister Sophia (pictured) waited for 60 hours to cross into Poland and is also having trouble with the visa system

Her dad normally lives in Lviv, western Ukraine, but is now with his stepdaughter in Poland trying to get her a UK visa after she was "petrified" by the fighting.

She waited in the cold for 60 hours to cross the border, but Gemma's stepmother has for now made the difficult to decision to stay in Ukraine.

Her dad, Tony, and stepsister Sophia were told to go to a visa centre in Warsaw last week - but so far the process has been far from easy.

"There was one lady working and they were in there for about six hours. They were told they had to fill out a form online," says Gemma.

The family then found out there was a centre much closer, in the Polish city of Rzeszow. Image: There are long waits to get into Poland at many of the border crossings

"There was a poor guy was there as well with his wife and he was getting told lots of different information," says Gemma, from St Helens.

"He rang the help centre I think 10 times and was getting mixed signals: 'You need to go here, no you don't, come here - you have to go there'."

Gemma's family have filled out the online form but have been waiting in Poland for days to find out when they will get another appointment at a visa office.

That's despite both her stepsister and stepmum having had visas in the past to visit the UK.

Read more: How can Ukrainians get UK visas - and why is it proving so difficult? Fleeing refugees with passports can apply for digital visas to come to the UK, Priti Patel confirms

"They've been able to get a visa to see Big Ben but now there's a war and their lives are at risk, they're having to wait," Gemma says.

It's more stressful for the family as her stepmother, Oksana, is still in Ukraine.

"We're hoping that Oksana will change her mind and hopefully go to them, to safety. She wants to help, she's a lovely lady - she wants to help people." 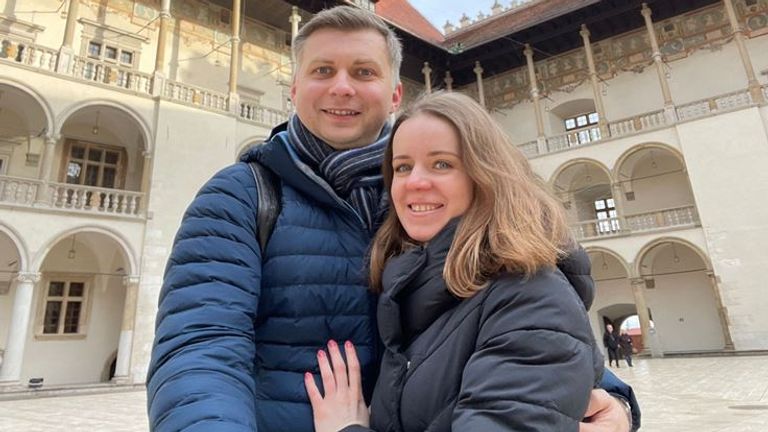 Image: Augustas's wife had her visa approved but it wasn't printed in her passport - now they're stuck in Warsaw

Augustas Daugela, a Lithuanian man who's lived in the UK for 17 years, is also stuck trying to get permission for his Ukrainian wife to come to Britain.

Her spouse visa was approved before the war and all biometrics done (fingerprints and photo), but there wasn't time to print it in her passport - and the office in Kyiv has now closed due to the war.

"Without it we cannot board the plane or anything like that," he says.

Augustas's wife stayed in Ukraine to finish up business after their marriage last year, and they were hoping to finally start their life together in the UK.

However, they are stuck in Warsaw in Poland, the British embassy can't help and UK authorities have said it could take three weeks to sort out.

His local MP in Glasgow has taken up his case, but Augustas says: "Nobody can help us, the visa application centre cannot help us because the Home Office doesn't know what to do... We don't have any sort of clarity."

He says that while his situation is not as serious as the problems facing Ukraine's refugees, there should be a "common sense solution".

"Border Force could be able to access systems and check the visa was granted... We've done all the checks, everything, there's no reason why they can't let us come back to the UK."

Source: https://news.sky.com/story/ukraine-war-families-tired-and-frustrated-with-uk-visa-system-for-refugees-say-it-is-next-to-worthless-12561806
We use cookies to ensure that we give you the best experience on our website. If you continue to use this site we will assume that you are happy with it. Ok