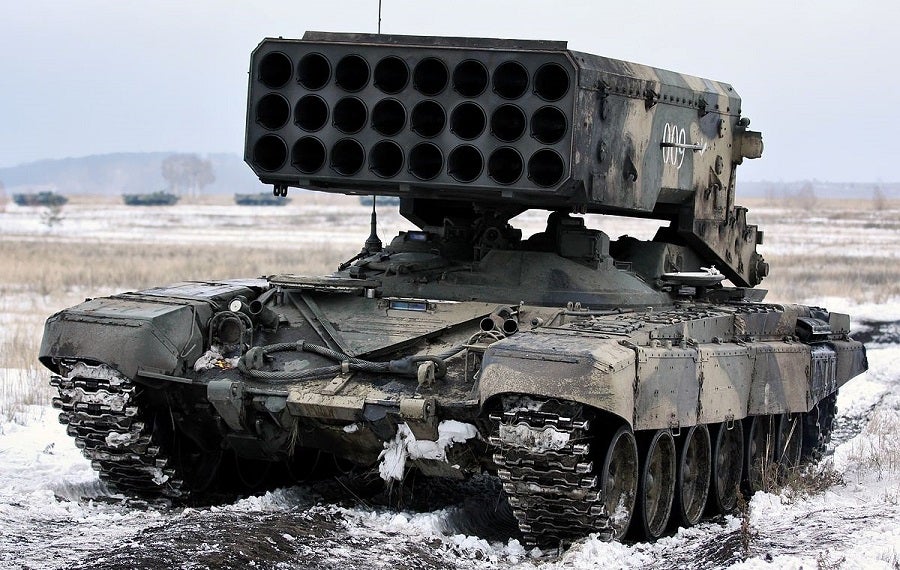 According to the US Pentagon, Russia has fired more than 625 missiles in the two weeks since it invaded Ukraine, about a hundred of which were launched in the first few hours of the attack. Most of them were short-range ballistic missiles and some were surface-to-air missiles.

But there is a weapon that causes more damage than regular missile strikes. Thermobaric weapons, also knowns as aerosol bombs or fuel air explosives are two-stage munitions. Russia has been accused of deploying these sinister weapons, first by the Ukrainian ambassador to the US, then by UK Defence Secretary Ben Wallace.

Wallace said during a visit to NATO ally Estonia on 3 March: “How far [Russian President Vladimir Putin] will go, what weapons he will authorise to achieve his ultimate aim is unknown, but we’ve seen the use of massive amounts of artillery. We’ve seen the deployment of thermobaric artillery weapon systems and we worry how broad those could go.”

Footage from Ukraine circulating online, which shows Soviet-made TOS-1 220mm 24-barrel multiple rocket launchers capable of launching thermobaric weapons mounted on T-72 tanks, is yet to be independently verified, so is the use of such weapons in the war so far. But analysts and experts say it is only a matter of time.

How do thermobaric weapons work?

A thermobaric weapon can be used in missiles or bombs, and it is filled with an aerosolised fuel and toxic powdered metals. When it detonates the explosive fuel disperses rapidly, creating a large cloud of fuel which then ignites as it gets in contact with the oxygen around it.

Royal United Services Institute research analyst Sam Cranny-Evans explained in a Tweet: “The blast causes two things: enormous heat, up to 3,000 kelvins (2700° C) as well as a long period of relatively high overpressure. The pressure or blast wave created is not as high as a conventional high explosive (HE), but it lasts for longer, creating more damaging effects.”

As all the oxygen burns away in the surrounding area, if thermobaric weapons are used against a building, the pressure itself can kill anyone taking cover inside.

Such weapons are very effective in causing devastation in urban areas and can penetrate bunkers or underground metro stations, which as those where Ukrainian citizens are sheltering from air raids, by sucking the air out of the lungs of occupants.

Thermobaric bombs have been used by the Soviet Union against China during the Sino-Soviet conflict of 1969 and in Afghanistan in 1979.

Western nations have been also using such weapons since the 1960s in Vietnam and in the mountains of Afghanistan. Rudimentary versions of thermobaric weapons, however, were already developed by Germany during the Second World War.

Thermobaric weapons are not yet banned, but there are plenty of arguments against their development and use. Even if a military facility is targeted with a thermobaric missile, the effect of the detonation is likely to extend to civilian areas.

Russia did not admit nor deny using thermobaric weapons in Ukraine.

Tula Arms Plant, part of the Russian state-owned company ROSTEC, announced the production of the 9M1133F-1 anti-tank missile with thermobaric high-explosive warhead in 2019.

The vehicle is the Kornet-D1 self-propelled anti-tank missile system mounted on the chassis of the BMD-4M airborne assault vehicle.

The Kornet anti-tank missile system, developed by the Shipunov Design Bureau of Instrument-Making, can take out tanks and other armoured targets. Russia reportedly continued the testing of the latest version of Kornet-D1 air-droppable self-propelled anti-tank missile systems towards the end of 2021 as it was building up military troops on its Ukrainian border.