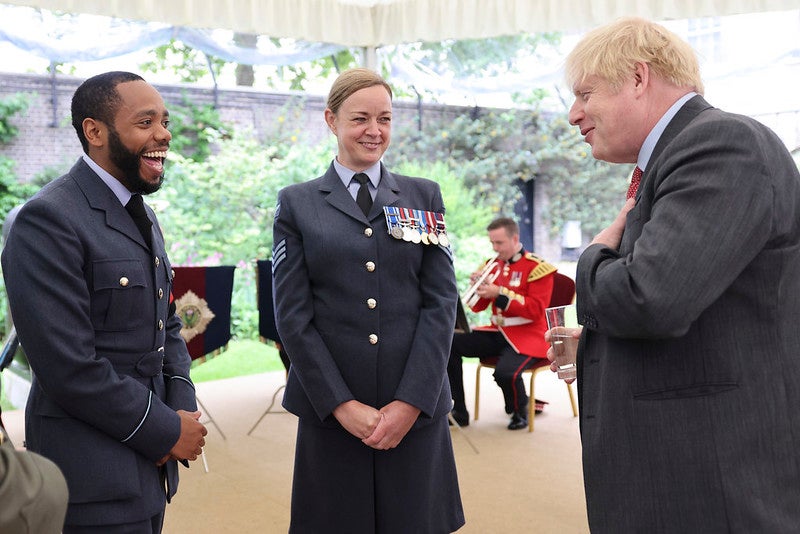 The body armour is expected to be made available to British personnel from next month. In picture, Prime Minister Boris Johnson with military personnel. Credit: Number 10/ Flickr. (Creative Commons)

The UK Government has announced the introduction of improved body armour for women in the armed forces.

The roll out is part of the government’s efforts to modernise the armed forces, and cater to the varied needs of active-duty personnel.

According to the UK Ministry of Defence (MoD) statement, the body armour is referred to as the Virtus Scalable Tactical Vest (STV), and is expected to be made available to British personnel from next month.

The kit was adopted following extensive trials with serving female soldiers to ensure that the STV meets the requirements of servicewomen.

The UK is also introducing an improved range of clothing, with more sizes and other changes, to offer a more ergonomic and high-performance outfit for all personnel.

It will include up to 25 different sizes of the shirt.

Brigadier Elizabeth Faithful-Davies said: “I am very pleased that we are continuing to roll out a wider range of combat clothing and new sizes of the scalable tactical vest for our service personnel.

“Now that women are employed in all roles across the Army, it remains crucially important that all our equipment is designed to ensure we can operate efficiently and effectively, in both training and on operations overseas.”

UK Minster for Defence People and Veterans Leo Docherty said: “All roles within the military are open to women, and we are committed to providing the best equipment to help them do their jobs.

“This is one of the many changes we have introduced to improve the experience for women in the Armed Forces, and the new body armour and range of clothing sizes will increase the choice for our serving women.”